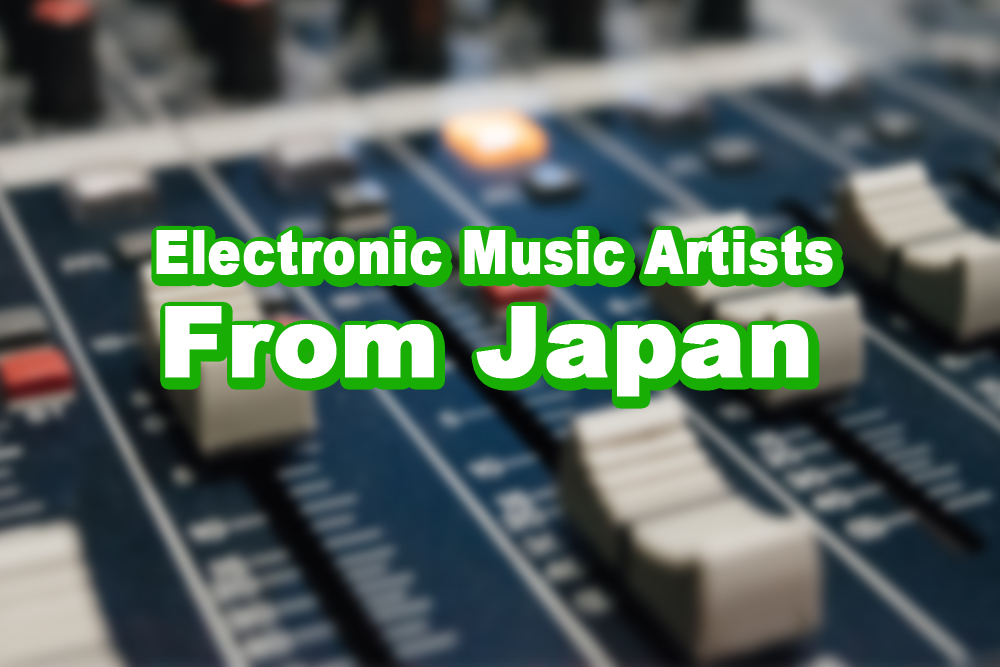 “What is your favorite artists?” We often make this kind of conversation.

We, as Japanese, think there are lots of great artists whom we can proud of to the world.

In this article, I would like to introduce the artists whom I want you to know from techno, electronica, breakbeats, hiphop, ambient, and glitch-noise genres.

How about to listen other artists rather than Yasutaka Nakata and Takkyu Ishino who are great and worldwide artists?

You probably can feel the new music experience.

In the artists I want to introduce, I often meet people who already know this artists. This artists let me know there is the great sound without lyrics.

If you have never listened this artists’ music, You should listen and feel his world.

I recommend you to listen “The Final View” which is my favorite and originated from “Love Theme From Spartacus”.

He served music director of COMME des GARÇONS’s fashion show in Paris, and he proposed the theme song of “Samurai Champloo” that movie is same director with “Cowboy Bebop”.

Even though he contributed to various music scene, he passed away in 2010 unfortunately because of traffic accident.

By the way, Kei Nishikori who is the worldwide Japanese tennis player said Nujabes is his favorite artists.

Nujabes’s song is genre of Hiphop, but some people who often listen to music of other genres add Nujabes to the favorite lists.

His great skill of sampling sense and making nostalgic sound, and also the everyone said he was pulling and was expressed the possibility and attractiveness of the loop music

When I did not know everything about DJ, I was saying “DJ is good because they just press something button and just stand over there.” However, HIFANA defeated my shitty idea by their music.

When people say computer music, it is compound of programing or sequence. But, HIFANA make rhythm by hitting the sampler pad and add the scratch and/or percussion which is their style.

For now, you understand their music is awesome, but their performance is also fantastic, not only sound; I think this is the their strong point.

They actually got the best award of Japan Media Arts.

In Japan, Ken Ishii is introduced as “the most famous Japanese techno DJ in the world“.

So, he is popular with the name of “Techno God” by people who love this techno genre.

He actually was on the stage of “Tomorrowland” in 2017 which is the stage of the world’s highest EDM. Moreover, he performed at Nintendo Switch Presentation in Tokyo too.

He is the iconic musician of Japan, but he don’t often appear on the TV shows (including talk show), so there are lots of people who do not know him even some his fans do not know what he look like.

He, Ken Ishii, is the first step to enter the techno genre which is not techno-pop for me. So, I want you, who have never listen to this techno genre, to listen his music.

The features of the sound he made are really intelligent, futuristic, and no waste.

The clear world, means the noise is infinitely little, is spreading, and the feeling of comfort and the sound that make me dance are living together all the time listening.

It is not too much to say that Susumu Yokota is the best “domestic” ambient.

Especially “Sakura” which is released in 1999 that we can feel Japan partly is acclaimed as “Second Coming of Bryan Eno” in the media of UK, and Bjork and Thom Yorke are officially saying as the fan of him.

For your information, Bryan Eno is like an ancestor of ambient.

The attractiveness of Susumu Yokota’s music is impressive melody. It is really great that music itself is floating in space with simple and clear sound.

I think melody maker has good point to say when I talked about him.

However, he passed away in 2015 because of disease.

People who know Tujiko Noriko are called “Japanese Bjork“. She is also called  “Diva of electronica” in France where she is living.

Once you listened to her music, you can get the its meaning.

Generally speaking, there are lots of instrumental music in the genre of electronica, and those rhythm and melody are hard to sing. However, she overcomes those difficulties and developed to deeper world; I think this is the charm point of her music.

I do not know why I can sympathize her music even though her voice like floating, mysterious voice like somewhat feel rejected, and unique lyrics are hard to understand. Even if you cannot get the lyrics, the feeling is same as just reading the lyrics.

The power of strong fantasy of emptiness, like the nightmare that we dream comfortably, the story we recognize falsely in real world are build her one and only world made by sound, lyrics, and voice.

Do you know the genre of “glitch-noise“? I mean this is the most minority genre in this article.

The noise that occurs by technical false such as the sound when we connect the cable to the amplifier is called “glitch-noise”, and AOKI takamasa make the most beautiful melody by using these noise.

The sound AOKI make has 2 contradictory properties; it is like soft or hard, simple or complicated etc.

I can guess you are going to be surprised by “biggest music ambience made by minimum number of sound” even though it is so simple as minimal techno.

After you listen to AOKI’s music, and if you think it will be good to listen with Tujiko Noriko, you have good sense of music. Actually, AOKI takamasa and Tujiko Noriko collaborated already.

Are you saying how is it?

It is hard to explain my friends.

Just listen first and feel their music by your sense from following below.

I want to share interesting things with you! I like to study many things such as languages, different cultures, and sports, etc... Enjoy with me!!つまり、宜しくお願いしますってこと。